Ebon's exclusive license of the AsicBoost patent puts it in a very strong competitive position, and it is likely to develop into the 'Qualcomm' of the mining industry, even absorbing miners heavily dependent on Samsung, creating a new mining company that is capable of challenging the industry leader Bitmex. If this vision holds, Ebon will become the most suitable miner in the current market for investing. 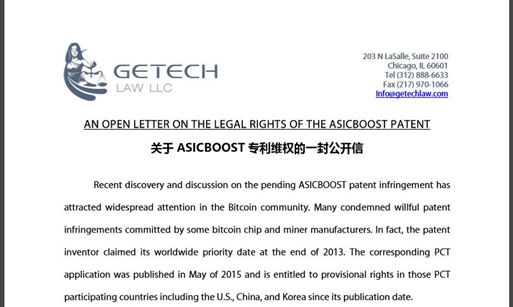 On December 1st, Huangshou-based Ebang International Holdings Ltd (Nasdaq: EBON) announced it had signed a technology licensing agreement with AsicBoost patent-holder Circle Line International Limited, granting full exclusivity to the patent. After optimizing a bitcoin mining machine algorithm, AsicBoost can greatly reduce the amount of work a mining ASIC must do in order to compute a hashing attempt, thus reducing the energy consumption of the mining machine. The performance of the mining machine can be improved by about 20%, and the corresponding savings in mining costs are also about 20%.

AsicBoost, a SHA256 computing optimization algorithm developed by cryptologist Timo Hanke, PhD, was granted global priority by the inventor in late 2013 and published in May 2015, according to a statement from the patent attorney representing the patent. You can also find Dr. Timo Hanke's revised AsicBoost white paper, published in March 2016. A 2017 letter from Getech, a law firm commissioned by the patent firm, noted that no company or individual had been authorized to file an AsicBoost patent, yet some mining companies had applied the design methods covered in the patent to mining hardware or software. At the time, the Chinese legal community held that the patentee had unsuccessfully applied for the patent, and one could therefore dismiss the patent's claim.
Today, things are very different. The patent went to Circle Line and was eventually granted in South Korea and Europe, while the patent request has yet to be approved in the United States and China. Circle Line International, meanwhile, has recently sued Samsung in South Korea for patent infringement, demanding that it should stop making unauthorized AsicBoost equipment and destroy its inventory of finished and semi-finished products, according to We-media Wushuo Blockchain.

Mining companies that rely on Samsung will be in an awkward position since the patentees do indeed have South Korean patents and their claims are highly likely to be upheld by South Korean courts. Currently, among the mining machine manufacturers still in the office, Bitmain mainly relies on TSMC (NYSE: TSM), Jianan Yunzhi relies mainly on SMIC (HKG: 981) and Samsung (KS: 005930), with some production at TSMC, Ebon mainly relies on Samsung and TSMC, and Shenzhen Bit Microelectronics (Shenma mining machines) mainly relies on Samsung.
The patentees are suing Samsung in South Korea, and if they win, that will put them in an awkward position as well. There have been rumours in the market that Samsung has failed to acquire much capacity of 8 nanometers this year, so it lacks shipping capacity. In the future, if Samsung loses its capacity support again due to the lack of patent authorization, it will completely fall into the dilemma of no rice in the pot. Some would say that Shenma could do anything without AsicBoost, but then the miner's energy consumption would go up significantly and it would no longer be competitive, so this option is unnecessary to follow or consider again.

Many investors outside the circle do not understand the current status of the mining machine industry, their understanding is still at the stage of Bitmain, Jianan Yunzhi and Ebon International, but in fact, the industry has already entered the duopoly of Bitmain and Shenma. Shenma was founded by Yang Zuoxing, who once worked in Bitmain and single-handedly created the once-dominant Jihuang S9. The industry delights to talking about whether Yang Zuoxing ever used 16 nm chips to make mining machines, completed more or less to 7 nm mining machine standards from Bitmain in performance. Because of this, Shenma's flagship M20 product series sold as many as 600,000 units in 2019 and may have contributed more than 30EH/s computing power in 2019, meaning nearly half the growth of bitcoin's online computing power in May 2019 came from Shenma mining machines. While the exact average price for this batch of miners is uncertain (prices are subject to adjustments due to bitcoin prices), if the prices of various models from the company's M20 series are anything to go by, what miner's 2019 revenue could be in the hundreds of millions of dollars. Thus, Shenma has pushed Bitmain into a corner, which has become a thorn in the side for the industrial leader.

European patents also mean that unauthorized miners can no longer be exported to Europe, especially northern Europe, such as Sweden and Iceland, which are suitable for mining. While TSMC, the world's largest contract chipmaker, will not be bound by South Korean or, in theory, European patents, it is likely to consider partnerships with unauthorised miners carefully, has historically focused on compliance issues in the US and Europe. Firstly, the miners that TSMC supplies must not be exported to Europe, and secondly, it may consider scaling back its co-operation with unauthorised manufacturers. Especially for the chip OEM, mining machine manufacturers are still not mainstream customers, so it's unnecessary to take the risk for mining machine manufacturers.

If Samsung can no longer provide capacity and TSMC has concerns, SMIC is left with the option. However, some analysts pointed out that during the CNY bull market 3Q 2020, Jia Nan's profit margin was lower than expected, probably because SMIC's N+1 process yield rate was low, leading to a high cost per machine. However, as a transition process, there is a big question mark over whether N+1 can improve yield rate in the future, whether SMIC can have batch production capacity, and whether SMIC can finally make real 7nm under the background of Liang Mengsong's resignation and the US sanctions against SMIC advanced manufacturing process. SMIC's announcement in late December confirmed the speculation, in saying that "according to our preliminary assessment, our company operations and financial situation in the short term will show no significant impact, but an adverse impact will follow later for our advanced technology research and development and the productivity construction, the company will continue to communicate with relevant departments of the US government, and take all feasible measures as appropriate to actively seek solutions and strive to minimize the adverse impact."

The AsicBoost patent spoiler is likely to reshuffle the industry, which this year has limited chip capacity for mining hardware manufacturers because of strong demand in other industries. Shenma is the most affected, if you can't reach a patent licensing agreement with Ebon, you will definitely go hungry. Considering the relationship between TSMC and Samsung, the success probability of turning to TSMC for production capacity is extremely low, while finding SMIC OEM also has to go the same way as Jinan Zhiyun again. Therefore, the best option for Shenma is still to reach a partnership with Ebon, the exclusive licensee of the patent, so as to continue to cooperate with Samsung. However, Samsung is expected to mass-produce 5 nm (equivalent to 7nm+ of TSMC) in 2021, and its production capacity will be greatly expanded. At that time, Ebon will hold a large number of Samsung's 5 nm production capacity, so that its partners can get rid of the current shortage for OEM capacity, and thus occupy a favorable competitive position in the current bitcoin market.

According to international practice, the general royalty of patent rights shall be negotiated by both parties, but we can refer to Qualcomm's 5% fee standard. Based on this, it can be inferred that if the revenue in 2019 can be maintained, Ebon shall pay tens of millions of US dollars in license fees, which will be converted into the net profit of Ebon in the vast majority. Ebon, on the other hand, lost $42.4 million in 2019 revenues of just $110 million. In other words, it could become a 'Qualcomm' in the mining industry and build a business model with long-term licensing fees. Which can clearly enjoy higher valuations than mining.

But it won't simply end here. For EBON, simply charging patent licensing fees is not maximally beneficial. If it can form a strategic relationship with Shenma through cooperation, to eventually absorb or merge with Shenma, it can return to the first echelon of mining machine, and again challenge the Bitmain, while Shenma can also obtain the listing status, and do not have to struggle for a separate listing. As a matter of fact, it is very difficult for any company to be listed on the stock market without any rice at present, and it is bound to face the problem of capital exhaustion, so it is not a bad choice to borrow chicken eggs. And with Ebon walking on two legs with the exchange, it is entirely possible that the miner business will depend on Shenma, so that Ebon itself can concentrate on developing the exchange business. Therefore, any cooperation with Ebon will lead to a win-win situation, and reshape the new mining machine manufacturer in line for Bitmain's leading position. Meanwhile, Chinese investors will finally have a more interesting mining hardware investment target than Jia-Nan.